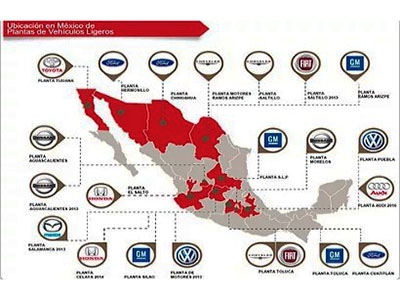 Tecnacar has recently established a new facility in Mexico to market its range of Electric Industrial Tow Tractors, providing the automotive industry in Mexico with the advanced technology that has been already successfully implemented in most European producers. The new company, TECNACAR DE MEXICO SA de CV is based in Salamanca and Aguascalientes, and is now expanding his dealers network to the whole Mexican territory.

The automotive sector in Mexico has been driven by the productive presence of the top ten vehicle assembly companies in the world, such as General Motors, Ford, Chrysler, Volkswagen, Nissan, Honda, BMW, Toyota, Volvo and Mercedes-Benz. New plants will open in 2013-2015 as production expands, with the number of vehicles produced doubling to 3-million vehicles by 2015's end, from 2009 levels.


Share:
PREVIOUS：Tecnacar includes its TGW bidirectional online telemetry system on all the VTA
NEXT：Scania choose Tecna Tow Tractor for his factory in France

If you want to get our product update information in a timely manner, please fill in your e-mail message to let us contact you, we will send product information to your e-mail.